Not really no I don't think so. I did a photoshop contest in 2008 called 'One Letter Off' and this was my submission (of many): 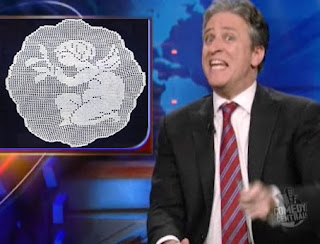 How much work do you think I did on this one? Less than 5 minutes probably. I didn't make the top 40 submissions. But then today on the Daily Show we got the mandatory explanation for Jon Stewart's absence. div>

No I don't honestly think a writer found my shop and used it 5 years later but I do think we thought of the same joke that actually made it on air!!!!
Posted by Beth at 8:09 AM