This could have been a bad idea....

I'd been thinking about reupholstering my 2nd hand couch for a while now, just to see if I could actually do it but after reading up on it I wasn't so sure. But I did know that sitting on my couch for any amount of time left it sagging and I had to rotate cushions all the time. But they weren't the problem. The books pointed to the springs as either needing to be replaced or repaired and I figured I could do that much. 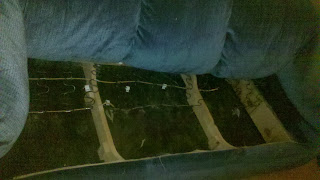 Saturday night, I'd been to the doctor for a sinus infection that has lasted 2 weeks now and was just getting on antibiotics. I was cleaning up the living room and it was time to rotate cushions again. This time though I pulled out my box knife and cut the fabric and padding below off completely. This is what I saw. They were off on one side entirely and had curled up. No wonder the couch sucked. 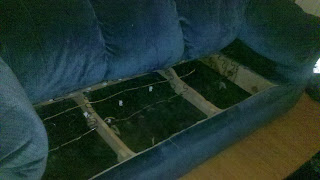 I tried to reposition a few but my weakling hands weren't strong enough. I needed some tools. I couldn't really imagine regular pliers doing the trick, even though I had them so I waited until Sunday morning to hit up Joann's for their upholstery section. They had stuff for curtains and sewing cushions. Nothing heavy duty for respringing a couch. Next I went to Lowes for some good pliers or somthing that might help. And some of the spring clips were missing so I needed them replaced or some kind of work around. 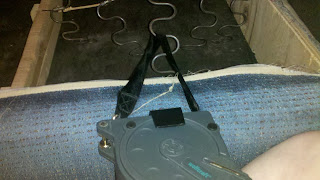 They had hardware for shelving and regular tools but still not what I wanted. I bought some pliers and in the plumbing section got some u-shaped hose clamps. I planned to fold them in half and screw them in place of the plastic clips. I got home still thinking about how to stretch the springs enough to reattach. My weakling strength wouldn't be enough I knew and I had a wratcheting clamp which could force it to stretch but I'd still be holding it tight. I though about holding something perpendicular to the spring that the clamp could sit against and scrounged around for something strong enough. I found the metal part from the laminate flooring installation kit. I could brace my foot against the bottom and wratchet the springs into place. It worked amazingly. I took as many of the plastic clips as I could find, pulled out the staples and drilled a hole instead. Then I pulled each spring enough to screw them into place with the clips and then the hose clamps. 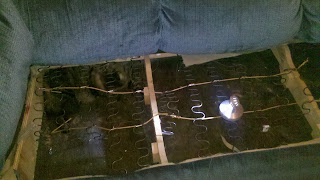 The cat loved it, I had to spray him out a few times with the water bottle. 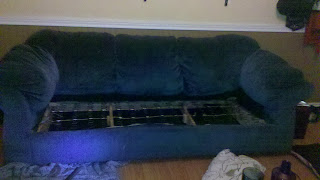 This is all fixed. I need to find more of the padding and fabric to replace what I ripped up but some scrap dropcloth works for now. I layed the padding on top of that for stability. 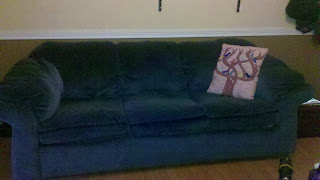 The couch is so comfortable now that within 10 minutes of finishing I fell asleep on it. For 2 hours. Also, if you've started a big project and Sunday morning rolls around, trying to find supplies and tools on your phone's web browser sucks. My arms and hands are sore but not nearly as much as if I'd resprung it without the tools.
Posted by Beth at 7:59 AM No comments:

I found a really cool idea on craftster.org and stole it, beat it up and left it dying in a ditch somewhere. Ever since I was a kid I've always loved the idea of secret passageways and hidden spots and this was perfect for me (to make) and for the birthday girl. It's a painting that is hinged on a necklace holder. You hang it on the wall and the painting opens into the secret hiding place.


I had a canvas that was the right size, 12"x12"( it was dependant on how big I wanted the box to be). I added joint compound to the canvas in the shape of a tree and let it all dry. Then I painted the background, which I probably should have done first... after that was dry I painted the tree with metallics randomly. Using some scrap wood, I made the box and then added hooks and hinges. 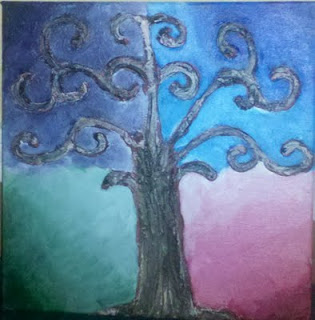 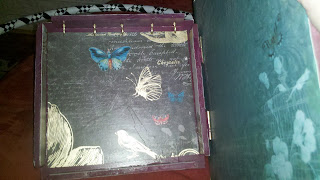 So the last month before I graduated I started knitting a stress blanket. Man I suck at knitting but afterwards I added some felted flowers into a tree shape. It was all pretty random how I added them but it will probably get promoted to Car Blanket this winter. 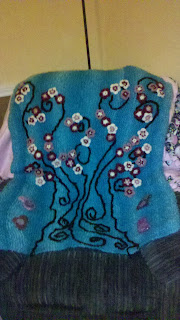 This is a bantha for my nephew's birthday party. I came across the Star Wars Book of Crafts and found an online tutorial that was geeky enough for me. I also got him some Thomas stuff because this isn't something he wanted and that's what he played with after opening everything. Ah well, I figured I should give him a gift he actually wants. I had the little sand guy in my purse and keep forgetting to give it to him. 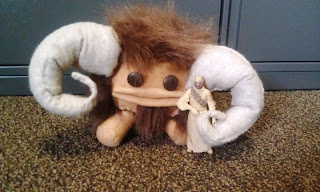