No I didn't go but I will next year I hope. I did stream it and caught some cool stuff, some way over my head but mostly interesting. 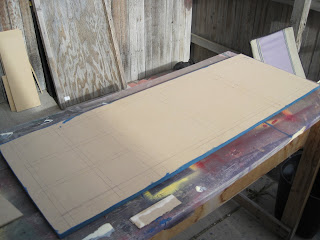 I bought 2 pieces of 1/4" mdf and cut it to be ~ 40"x30". Then taking a metal ruler I drew in lines to designate where I would be adding the (not routed) panels and windows. My wood (that's what she said) wasn't quite the right dimensions for it to be exact and since the panels are larger in height than width I had to adjust some of it, which you will see later on in this post. 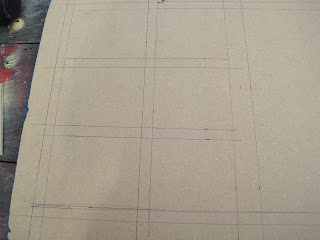 This is a close up of the soon to be windows. I also got a 1/8" piece of the same mdf and measured out the windows and panels and then cut them all out with a box knife. There was no way I was going to get anywhere with a circular saw, it was pretty flimsy. 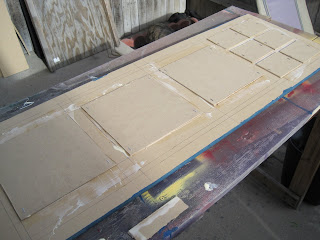 This is a partially finished door. Notice the blue on the underside. I got too excited and painted way too early. Mostly done with both sides I then noticed that the paint was oil based and all of my other paints are acrylic. Crap. Ya know the really cool crackle effect you can use to age painted stuff?  Yeah that's what I was headed towards. 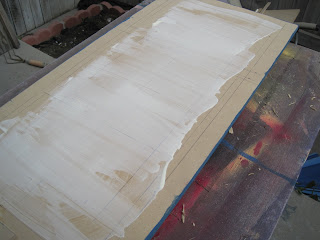 Back to the project. I poured wood glue over it and then spread it out with some scrap mdf which saved me a foam brush. 5 points to Gryffendor. 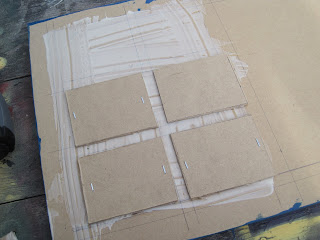 Then you place the wood over the glue aligning to the pencil lines. I used a staple to keep it in place until the glue drys like the New Yankee Workshop does but they never mention that for newbies such as myself it shows through. I actually tried removing them from one of the doors and the wood is too soft and thin. I either obliterated the area with the staple or destroyed the edge of the piece. So one door has 'em and the other doesn't. 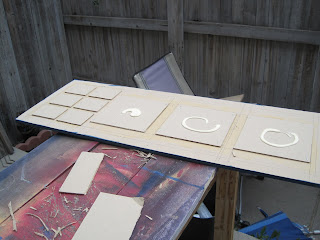 Panel layer #2. Gluey glue, stapley staple. The left door got a piece of trim on the end and instead of a top panel I put in a 1/4" strips framing the square. 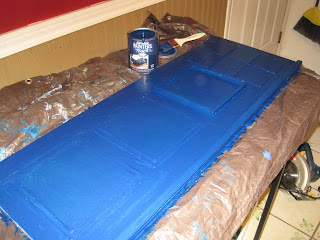 It rained that night and I couldn't paint anything and leave it out to dry so I layed down some tarp and painted one of the doors. The painting took longer than everything else. 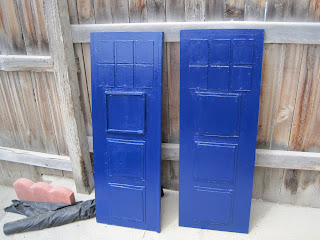 I don't know why I didn't take a lot of pictures in between but I painted what I wanted to be highlighted white and some light blue and let it dry, also the windows got white too. 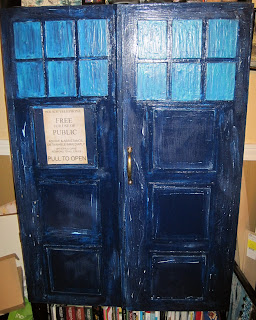 Then I did several  layers of watery acrylic and let each one dry, this look a long ass time. After wards when it was dark enough with just a hint of white peeking through I sanded the parts I'd highlighted, where I wanted it to look worn. I hit everywhere else with the sander just to remove any shine or smoothness. 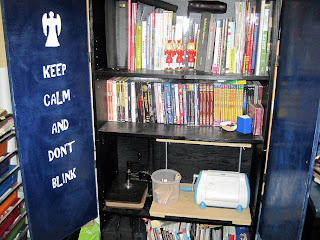 Inside I also sanded but then stenciled on the angel and the warning. The stencil was printed from word and then the letters were cut out with an exacto knife. After the white dried I painted over it with a few layers of glow in the dark paint. I'm still trying to figure out how to take a picture of it... glowing.... in the dark... 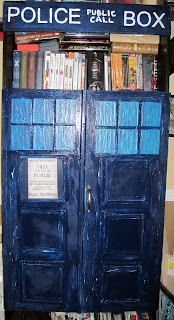 The Police sign was stenciled the same way, then painted over with more glow in the dark.

The windows had many layers of the glow in the dark paint, then watery navy blue, then both mixed. Again and again, I had to keep hauling it into the bathroom to check the glow.
Posted by Beth at 9:30 AM No comments:

A hedgehog and Who

I saw this post on Craftster.org and was obsessed:

So I e-stalked the artist and bought the pattern from etsy. It's soo teeny! I dilligently bought the crochet hooks, since mine don't go that small and went to work. Ok I can't do it, I'd have to be using thread to crochet with so I went to the smallest size I could handle and made a couple. This is the newest one. 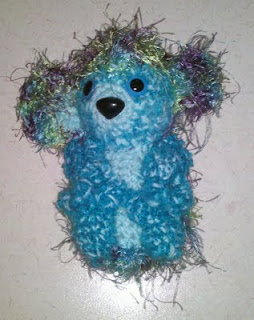 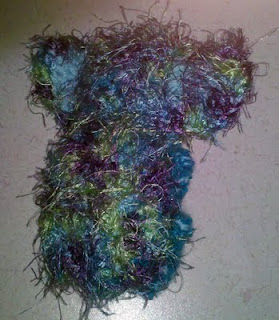 The first attempt has some problem with ahem... scoliosis so I did not take a picture.
Just started project #2! 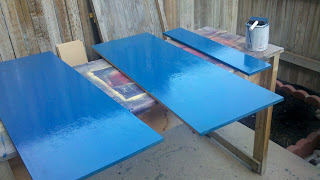 ﻿It is Doctor Who related but I won't say what it is just yet. It cost me an ami octopus. I heard my neighbors in the back patio next door and went to tell them I would be using power tools for 20 minutes and make sure it wouldn't cause [future] problems and offered an octopus to their kid. The husband does crochet and showed me some stuff much better than the octopus. I think I may have to one up them with a hedgehog.
Posted by Beth at 11:39 AM No comments:

I just created an ebook through lulu.com and am awaiting Amazon's approval process for a Kindle verison. This was based on the fairy book I made for Eden last year. It's only the first one and it doesn't have even half of the names and descriptions in all of the versions.

I started this quilt a few years ago and then got into some other stuff but haven't forgotten. Except the damn cat ran off with my quilting foot and I know he did because a month ago I saw it someplace weird and put it somewhere and can't remember where. 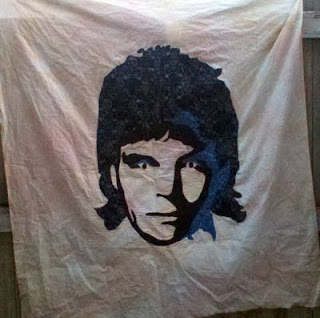 Macgyver's eyes are eating my soul. Well they would a lot less if I could get some free motion shading done. The fabric is dyed with tea, it made the closest color to skin I could find. The rest, including the mullet, is appliqued. I ordered some super awesome fabric from Spoonflour for the back: 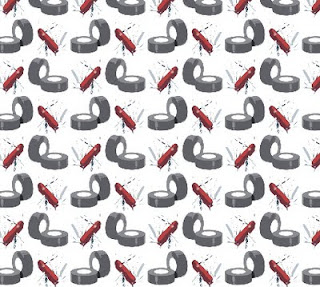 I got the reader at graduation to say that my middle name was Chewbacca (M. Ed. thankyouverymuch). This was filmed by my sister on her phone. I can only hope I have inspired her.

Since there's a theme here.... 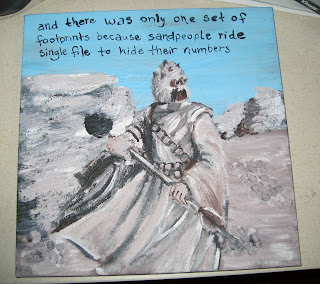 His hand isn't finished but this was a hard one.

I made 2 of these and gave one to my brother. He asked what it was from :( The pattern comes from Craftster.org user GeekySweatheart who has it embroidered and a free pattern:


Star Wars Embroidery
And just because this is amazing, I came across a Han Solo mini shrine on craftster.org and it is unbelievably awesome: